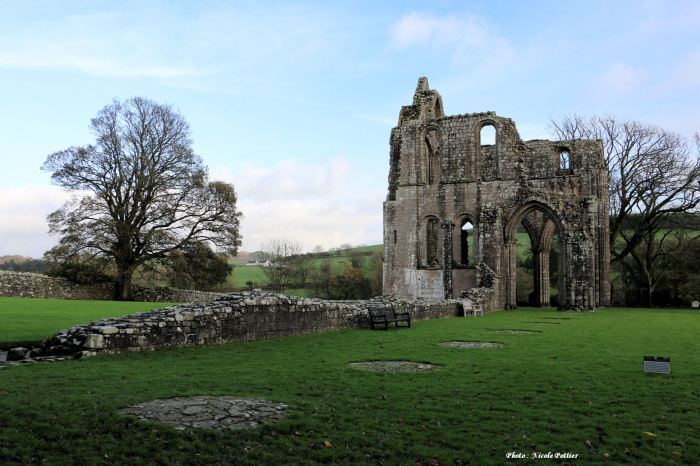 Dundrennan Abbey, in Dundrennan, Scotland, near to Kirkcudbright, was a Cistercian monastery in the Romanesque architectural style, established in 1142 by Fergus of Galloway, King David I of Scotland (1124–53), and monks from Rievaulx Abbey. Though extensively ruined (the transepts are the main surviving parts), Dundrennan is noted for the purity and restraint of its architecture, reflecting the austere Cistercian ideal. It is also built from very hard-weathering grey sandstone, so the original architectural forms and mouldings are well preserved.

Mary, Queen of Scots, after the Battle of Langside, spent her final night in Scotland here, in 1568. From neighbouring Port Mary, she crossed the Solway Firth to Workington, and shortly after was imprisoned by the English.
In 1587, following the Scottish Reformation, the land passed to the Crown. The site fell into ruin after it was subsequently used to house livestock. Historic Scotland maintains the site today as a scheduled monument and Category A listed building.

Thursday’s Special photo challenge : Traces of the Past.

This site uses Akismet to reduce spam. Learn how your comment data is processed.