Between 1923 and 1936, the Imperial War Graves Commission erected a series of memorial tablets in French and Belgian cathedrals to commemorate the British Empire dead of the First World War. The tablets were erected in towns in which British Army or Empire troops had been quartered.

The prototype Commission memorial tablet, placed in Amiens Cathedral in 1923 alongside tablets previously erected to other Empire troops, was dedicated to the 600,000 dead of Britain and Ireland. The subsequent design of the Commission’s tablet brought together the British Royal Coat of Arms with those of India and the imperial dominions: South Africa, Australia, Canada, New Zealand, and Newfoundland. The tablet’s inscription, written by Rudyard Kipling, referred to the « million dead » of the Empire. Produced by Reginald Hallward to a design by architect H. P. Cart de Lafontaine, the tablets were erected in twenty-eight cathedrals and churches, twenty-three in France and five in Belgium, with the bilingual inscriptions in each country in English and French, and English and Latin respectively. They were unveiled by a range of dignitaries, including members of the royal family, diplomats, politicians, and British Army generals who had commanded troops on the Western Front. 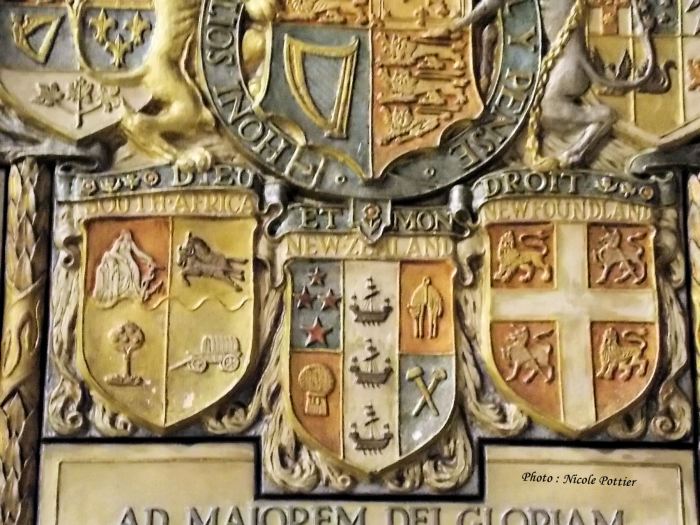 The inscriptions on the tablets in Belgium are in English and Latin, a decision that was taken in consultation with the Belgian ecclesiastical authorities, with Latin used as an alternative to the two official languages of the country. The Latin text is not a direct translation of the English text, with the Latin wording discussed in correspondence in 1925 between Fabian Ware and Sir M. Sadler.
Source : Wikipedia